That’s Latin for “Every translator is a traitor!” Since the diversification of human language at Babel, the art and science of translating human language has been the assumed necessity of human communication. It’s entirely possible because all humanity derives from a mother tongue, but it can be problematic because our tongues have been “confused.” Hence, translation is never cut-and-dry, it requires nuance, understanding, and the exact sense of meaning in the original language, as well as how it would be most aptly rendered in the receptor (translated) language – which often does not have the same concept or reference of the original language. That’s why, for example, there are so few Hebrew words for snow and so many for dirt and sand!

This means that translators must be always aware of the danger of violating the original meaning like a “traitor.” Since we have been translating the Bible into English for going-on 5 centuries, the sense among Christians that they’re reading a “translated text” can be lost on many English Bible-readers. But A.T. Robertson was surely right to remind us:

I was reminded of the danger in translation from 2 Corinthians 2:14, the first clause of which really reads:

But which may be translated, as the NASB:

But thanks be to God, who always leads us in triumph in Christ

The real challenge is the meaning of , from , “to lead in triumphal procession.” What does Paul mean by saying God “leads us in triumph“? 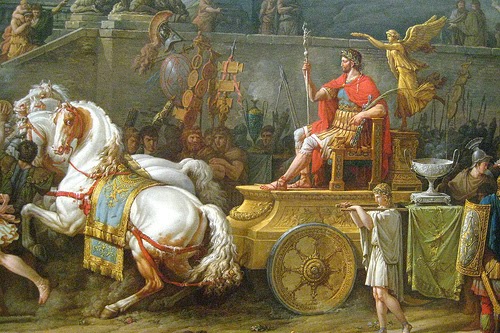 is a word that the Greeks borrowed from the Latin, triumphare.It was a specific, technical term in first century Rome that referenced the elaborate parades of conquering generals and Caesars, following military conquest.

Archaeology has uncovered over 300 references to Roman “triumphs,” which were vast civic events that could last days. They would involve the victorious general draped in purple in a horse (even elephant!) drawn chariot, followed by musicians, incense-bearing priests, the spoils plundered from the enemy lands, and… the conquered soldiers of the enemy. These captives would be lead in shame through Rome as they marched to their public execution, in sacrifice to the Roman gods.

In Paul’s day, to be “led in triumph” was to be captive on a death march to testifies to the greatness and glory of your Captor. Paul died daily (1 Cor 15:13; 4:9), suffering in the ministry of the Gospel, testifying to the glory of Christ and spreading the knowledge of God in every place (2 Cor 2:14b). Paul was Christ’s slave (not “servant,” in Rom 1:1, etc.)

Some translators have had problems with what Paul wrote, it’s such a startling and obviously “defeatist” approach to the Christian life. Even venerable translations, like the King James Version, have rendered it as “to cause to triumph,” which has spurred expositions of 2 Cor 2:14 that suggest Paul means “triumphant faith” or “victorious Christian living.”

While that may help some cope with the shock and harmonize with such biblical themes as Christian victory (e.g., Rom 8:37), that’s not what meant – by any stretch. My initial hunch on this was confirmed, in spades. Here’s just a few comments from Greek commentators, on trying to render it as “cause to triumph”:

“… the linguistic evidence for this meaning is weak or nonexistent (Thrall, Second Epistle to the Corinthians, 1:192).

“…must be abandoned, as no clear instance of in such a signification has been produced” (Bernard, Second Epistle to the Corinthians, Expositor’s Greek Testament, 3:50).

So what gives with the “cause to triumph” idea? Another commentator, David Garland, hit the nail on the head:

We must allow the first century meaning of the word to guide our interpretation before trying to make it match what we think Paul ought to be saying (2 Corinthians, 140-41).

We must bring our audience back to Paul’s day, not try to make Paul’s day fit our audience’s. Ironically, this need justifies paraphrased renderings to maintain the literal meaning. For us, “triumph” connotes victory, not defeat. So several versions have added “captives” in 2 Cor 2:14 to get the sense:

But thanks be to God, who continually leads us about, captives in Christs triumphal procession (New English Bible)

But thanks be to God, who always leads us as captives in Christs triumphal procession (NIV)

But thank God! He has made us his captives and continues to lead us along in Christs triumphal procession (New Living Translation)

Our Defeat is Our Victory

One of my favorite interpretive comrades, Henry Alford, explains the truth and translation necessity of 2 Corinthians 2:14, wonderfully:

In our spiritual course, our only true triumphs are, God’s triumphs over us. His defeats of us, are our only real victories. I own that this yet appears to me to be the only admissible rendering. We must not violate the known usage of a word, and invent another for which there is no precedent, merely for the sake of imagined perspicuity (Alford’s Greek New Testament, 2:640).

In other words, give us translators, not traitors! Let the real New Testament be unleashed on its readers and hearers… even in English.